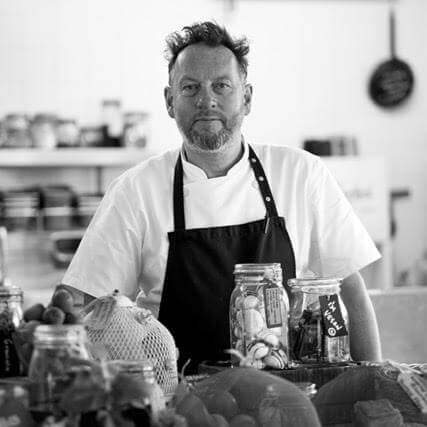 “Being a chef in Devon gives unrivalled access to the finest of fresh fish, shellfish, organic dairy, meat and wild game plus some of the best organic producers who farm in the region.”

Devon born award-winning chef Tim Bouget is passionate about sustainability. He cooks with a conscience, working in tune with nature to produce organic, affordable food using the South West region’s finest ingredients from sea and land. After an impressive hospitality career spanning over 35 years, working at some of the world’s top eateries, he returned to Devon in 2007 to set up ODE Dining with his wife Clare. Based in the picturesque village of Shaldon, ODE have received the Taste of the West South West Restaurant of the Year award in 2008 and 2009, Michelin Red knife and fork, 2AA rosettes and Waitrose Good food guide 6/10, Top 100 National restaurants awards.

In 2012 they opened Café-ODE, which adopts eco-friendly practices such as installing solar thermal and renewable energy systems, and use of compostable plant-based packaging and bio-plastic food containers, cutlery and drinkware. Community is at the core of the café’s operations and a cooperative with other local businesses was developed to share suppliers and to reduce the impact of carbon footprint.