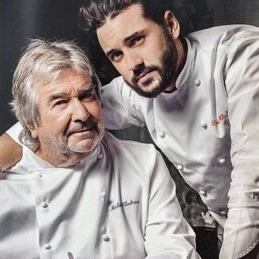 Michel Chabran is a starred chef who belongs to a generation that likes to harmonize tradition and modernity, drawing generously on the riches of its land, to which he will remain faithful the rest of his life. Over the years, he transformed the small family café into a prestigious Michelin-starred restaurant. He transmitted his passion to his son Louis, and under his leadership the next generation of Maison Chabran arrives with the same values and desire to grow.