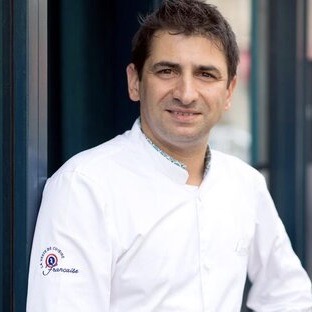 This young Breton boy had a passion for cooking since the age of 12.

After an apprenticeship in the heart of the forest of Brocéliande and a few seasons on the Atlantic coast, Stéphane decided to leave his homeland for London at the age of 22.
First of all, the Estaminet, a classy restaurant in Covent Garden, then Martinique to “feel” a little exoticism, the Ritz under the direction of John Williams, where he climbed the ladder of the tough job’s hierarchy as a junior sous-chef!
In 2005 Stéphane returned to his homeland and took his first place as a chef at the restaurant “Chez Cécile” in Paris, where he received his first distinction, a gourmet bib in the Michelin guide!
In 2008, it was alongside Alain Senderens, a top chef at the 2-star Place de la Madeleine in the Michelin guide, where he closed the loop.
Under chef Jérôme Banctel, he perfected an inventive cuisine that respects the culinary fundamentals.
Between 2011 and 2015 the anchor was set brilliantly in the kitchens of the Metropolitan, the menu he created reflects all his intuition and creativity, which he blends with his roots: a colourful French cuisine.
He works with neatness and accuracy, no more and no less than great art! In September 2014, Stéphane won the Gault & Millau grant for young talent, the “helping hand” that enabled him to open his first restaurant in Paris, rue de la Victoire: Louis.