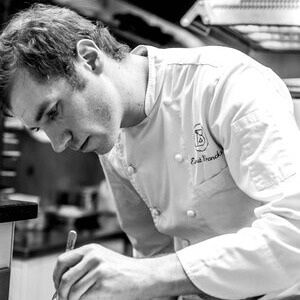 Coming from a family that followed the macrobiotic diet, young Ewout took control of the family kitchen at the age of 12! Little by little, that which was a necessity became a passion, Ewout decided to devote himself to it and make it his profession. And he never did things by halves!
In 15 years, he made his way through the biggest tables:
The Plaza Athénée, the Louis XV, the Pavillon Ledoyen, Comme Chez Soi, Le Cinq du George V then Le Meurice, and finally Le Pur Hyatt Vendôme with Jean-François Rouquette. It was the latter who, believing his deputy to be ready to take off, one day called one of Baltard’s associates to the Louvre, in order, “to pass on the baton” he said, thus following in the purest and finest tradition of this profession.