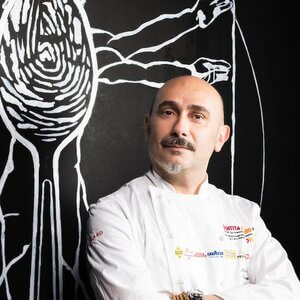 After attending the Ecole Hôtelière in Nice, he worked in several starred restaurants in France (in Monaco, Marseille and Nice). His Italian family background led him to Florence, where he worked in the three-star restaurant Enoteca Pinchiorri.
His career continued in Asia, specifically in Japan, Malaysia and Thailand.
He then returned to Italy and worked at the Rossellinis restaurant at the Hotel Palazzo Sasso in Ravello, where he obtained his first Michelin star.

Finally he went to the Italian capital where, in 2003, he launched his project: Il Pagliaccio (the clown).